This will be a quick update*, but an exciting one — the story for almost all of the 11 in-game missions has been written! All that’s remaining before final script editing and voice recording is just to finish up the dialogue for the last few. I expect I’ll have the last missions fully scripted by next week.

I have to admit, I’m incredibly excited about moving forwards to the recording stage. Several folks I know have generously offered their acting abilities, and I think that they’ll all fit their roles well. Here are some short descriptions of the main characters in the game, who will often be flying and fighting alongside the player.

Lt. Andrew “Rig” Nash
Usually second-in-command during missions. Younger and more energetic than Matthews. Primary concern is for his wingmates and subordinates. Terse and forward, one gets the impression that he’s suffered a few scars, both literally and figuratively, over the course of his career.

Ensign Kesha Orr
Fresh out of the training program, Orr’s level of experience is similar to the player’s. Usually the first one to point out new things or ask questions.

Ensign Adam “Belt” Brennan
Second in experience only to Nash. Likes to tell jokes and stories from his past. His ill-timed bantering often attracts negative attention from his superiors.

These descriptions might change slightly throughout the editing process. A lot has changed from the original story already, but I wouldn’t want to spoil anything yet…you’ll get to play it yourself when I’m finished.

* Sorry, no screenshots this time. I’ve recently suffered a hard drive failure and have yet to re-install the libraries needed to run Gateway on my (now fixed) machine to take some new screen grabs. Fortunately, I didn’t lose anything. Cloud storage is your friend.

I have a list of unfinished projects as long as my arm. It’s taken me a while to develop the discipline necessary to see my goals through to the end. So, this week’s post will be all about the various causes of project failure that used to plague me, years ago.

Of course, this list is not exhaustive, nor are these categories mutually exclusive. Readers are more than welcome to contribute their own insights.

Originally, my failed project, Wing, was about a group of young anarchists trying to buck the system and disrupt a benign, powerful empire simply for fun, when things get out of hand and they find themselves being actively hunted for their increasingly risky crimes. For your viewing pleasure, here are two screenshots. The resemblance to Gateway is fairly apparent if you look closely. 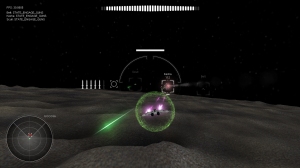 The player dives low to avoid being caught on radar.