A few years ago, I completed a project called Dactyl. It was a 2D asteroids-shooter-type game. There were 25 hand-generated levels populated with mines, asteroids of various types, useful equipment, and automated turrets. 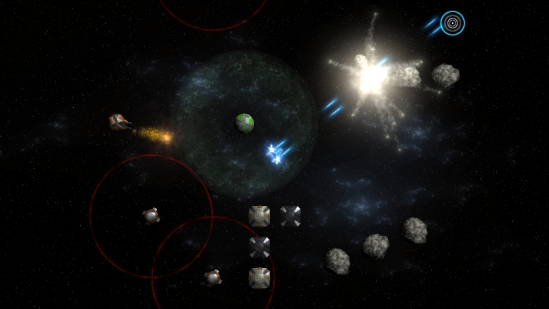 To visualize each level before I implemented it, I used graph paper and a pencil*. Once I felt a level was complete, I plugged the object coordinates into a text file, and then fed the file into the Dactyl engine. And pop, out came a new level.

This approach definitely wouldn’t work in Gateway. The size of each level (up to about 20km!), especially considering the differences between, say, the 10 meter fighters and the half-kilometer battle cruisers, made drawing complex scenarios to scale next to impossible. Making changes to level designs would also be painful: erasing a group of 30 fighters and shifting them over a kilometer would quickly eat away at my eraser and my sanity. Besides, my hands aren’t steady enough for that kind of nonsense. 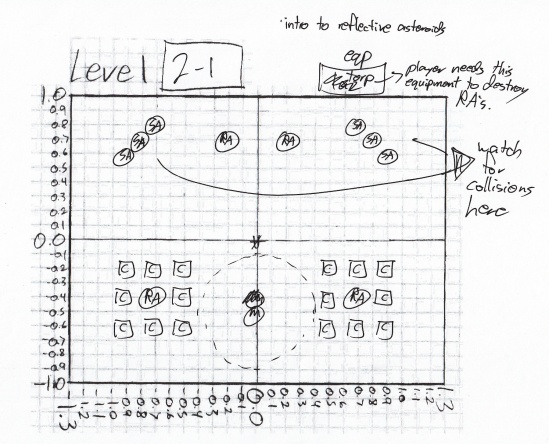 Dactyl levels were sketched out by hand.

The solution for Gateway was to build my own level editor.

I’ll admit that I didn’t spend a lot of time investigating existing solutions. I was (pretty) sure that there was (probably, maybe) some level editor somewhere that would offer the right parameters and would allow me to drag, drop, and configure all of the game entities I wanted onto the Gateway playing field, but I really didn’t feel up to downloading and trying various existing editors only to find that each one was missing a crucial feature.

Ah, yes…implementing things from scratch rather than using existing solutions. I often do this with smaller projects for a number of reasons: (a) I believe in doing everything yourself at least once, (b) it’s often more fun, and (c) I can usually whip up something small in less time than it would take for me to learn to use an existing tool. (I recognize that this is a twisted combination of both laziness and diligence.) I also (d) like to be intimately familiar with the code I use, and this is easiest when it’s code that I write myself. Additionally, my own level editor could be completely customized for exactly what I needed it to do. (Besides, by the time I started considering developing my own, the back burners in my brain had already fired up and began doing the work for me. I think somewhere back there I knew very early that I’d have to write my own.)

I intentionally wanted to keep my editor’s feature list as minimal as possible, since I’d probably only use it specifically for Gateway (although it could be altered without much effort for similar games) and didn’t want to spend too much time adding features that weren’t absolutely necessary. I just wanted the bare essentials for designing levels quickly and easily…so, there were hard choices to make.

C# .NET would be an ideal choice for this project, since I’ve worked with it extensively on a variety of projects. This meant that graphical user interface elements like buttons or text boxes wouldn’t be a problem. The next thing I had to consider was whether or not I wanted a 2D or a 3D representation of the world in my editor. There were pros and cons to each.

Advantages of a 3D level editor:

Disadvantages of a 3D level editor:

Ultimately, I decided to go with a 2D representation simply because the style of the game didn’t place a whole lot of importance on an object’s height or altitude within the game; the flight controls are more like flying an aircraft than a true 6DOF fighter (I did this to make the game simpler and more accessible to players). Thus, the world could fairly easily be represented in a top-down fashion. Of course, objects exist at many different “altitudes” in the game, but not to such a degree that it was critical that this be represented clearly in a level editor intended solely for myself.

Next, there were issues of scale to consider. I wanted to have missions that could potentially be around 20km by 20km in size. I also wanted everything in the editor world layout to be visible all at once without zooming or scrolling. Ultimately, I decided on a layout pixel size of 600×600, with every pixel being equal to 30 meters in real space. That was more than precise enough for my needs and resulted in a playing field of 18km by 18km.

My choice of scale had one unfortunate implication. The smallest unit of size that could be represented in my editor was 30m (1 pixel), but the fighters in Gateway are around 10 meters long, which was one-third of the smallest visible unit in my editor. Cruisers, being around 600 meters in size, could be represented to scale with 20×20 pixel sprites, but fighters posed a problem. I decided to simply make the fighter sprites larger than they would be in real space by several pixels in each direction, to allow easy visualization and selection with the mouse. 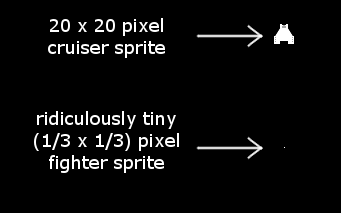 Without some changes, the fighter sprites would absolutely be too minuscule to determine orientation, select with the mouse, or even see properly.

Next on the list was to decide the kinds of features I wanted to support in terms of building worlds. Tools like selection, translation, and rotation were essential. A ‘snap’ functionality would be immensely useful in terms of both moving (snap to grid) and rotating (snap to angle). Since I’ve used Blender a lot, I decided to support Blender-style keyboard shortcuts (which often don’t require modifier keys like shift or control) to make things familiar and faster: ‘A’ to toggle selections, ‘G’ for grab, ‘R’ for rotate, etc.

After about two weeks, I had a fully-working editor. It only had a minimal set of features, but that was all I needed. 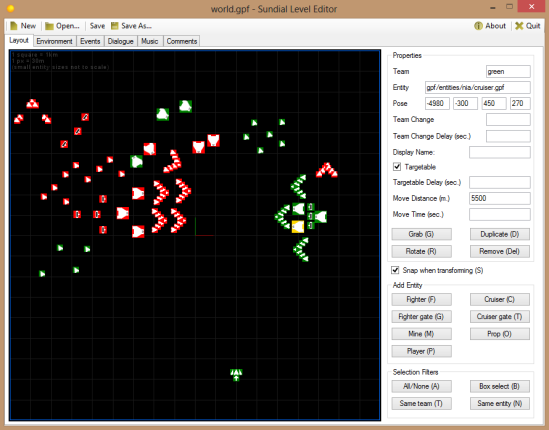 Level-building in progress. The player and a few wing mates are spawned far away from the action. The editor is just as much fun to use as it was to implement!

Team colours are represented by the highlights around objects. A grid in the background is used to determine distances. A few other tabbed panels are used for scripting music, dialogue, etc., and basically just contain multi-line text boxes.

Developing a level editor has been a very interesting and exciting experience for me. If anyone has experiences or stories working with level editors (including their own), I would love to hear about them in the comment section below.

* As a side note, I have entire sketch books full of old game level designs from way back when. Maybe I’ll post some.

One response to “Effective Level Editing”