Hypergate has been out for about 8 months and is available on Steam! Reviews are positive and folks seem to enjoy playing it.

I haven’t written anything on this blog since I released the game, although I’ve been very active on Twitter. (As an aside, the Twitter game dev community is pretty awesome! Lots of cool work being shown there, by a lot of cool folks. Be sure to check out #screenshotsaturday.) There is also a main Hypergate website here. I’ve released some updates to the game here and there, to fix a few reported bugs as well as enhance some existing features.

Currently, I’m working on the first major Content Update. This will include additional instant action locations, more equipment for your ship, Steam Cloud Saves, and a few other enhancements. I’m hoping to release Content Update #1 this month (August).

I’m also planning a second Content Update for release near the end of the year. It will include 10 more missions to continue the story of the Novan Interplanetary Alliance, and at least 2 new ships to fly. 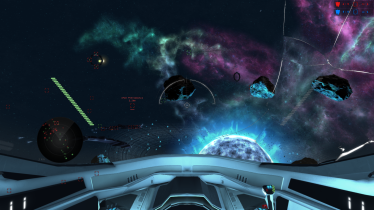 At some point, I might write a summary of Hypergate’s 5-year development story, if I can remember it all. At the very least, some sort of abridged timeline might be interesting.