Several months ago, I released Content Update #1 for Hypergate. This included the following features:

The update was well-received by existing fans, and also brought in some new ones.

I’m currently planning at least one more major Content Update, scheduled for mid-to-late 2020. This update will include 10 additional missions and will complete the story of the Novan Interplanetary Alliance. These missions will contain additional story elements, but the focus of the gameplay will be the same: warp in and blow up anything that moves. The script is complete and voice recording has started.

At least 2 minor updates are planned as well. These will include additional ships to fly, as well as the ability to play as the ISC or Marauders in Instant Action mode. I’ve also been playing around with the idea of adding a third-person flight mode, squad commands, and “attachments”: small additional enhancements that provide unique abilities to upgrades you’ve already earned.

Updates to Hypergate will always be free. Updates will always be integrated into the main game, not just as separately-acquired DLC. I’m a big fan of “game ownership”. Once you’ve bought the game, you get everything else that comes with it.

In my mind, a video game is more than just gameplay. The complete video game experience should include occasional updates and developer support, bug fixes when required, and a listening ear for players.

So, Hypergate players have bought the game experience, not just the game itself. Extra content is part of that experience. It’s also a thank-you to existing players for taking part in the world I’ve created. (And also for trusting me with their hard-earned $10 USD!)

Check out Hypergate’s main website, or the Steam Page itself. 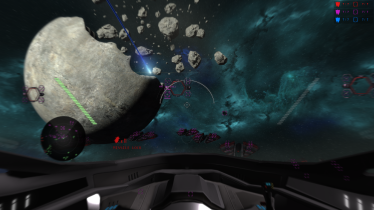 The player faces off against a Marauder fleet supported by gates.

A friendly fleet on standby.